Exciting visitors to the UmPhafa Reserve! 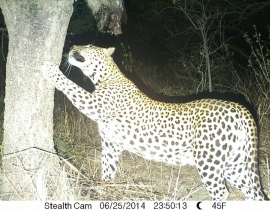 During the early hours of the 23rd June staff on the UmPhafa Reserve spotted two leopards! It is presumed that the pair are a female and her cub, as one was much smaller than the other.

A few days’ later staff found a warthog carcass and decided to see if they could attract some more unusual animals into the range of one of the many stealth cameras on the reserve. Amazingly they were visited by yet another leopard and this time it was caught on camera! It is thought that this leopard is a different visitor from the pair that visited a few nights earlier.

Leopards such as the ones spotted on the reserve are fantastic predators; they have short limbs, wide powerful paws and strong jaws which enable them to catch their prey. They use their long sensitive whiskers to help them feel their way in the dark and therefore hunt at night. The leopard is also an extremely talented climber, often taking its prey up into the trees with them.

It’s great to see these animals within the reserve and it is hoped we will continue to be visited by such fantastic wildlife, offering them a better chance of survival.

Leopards are currently listed as ‘Near threatened’ on the IUCN red list due to habitat loss and hunting for trade with some subspecies such as the Amur leopard listed as critically endangered, it is thought there could be as little as 50 individuals remaining in the wild.

If you would like to help support the work we do on the UmPhafa Reserve click here to donate.

To many it may not seem such a big... 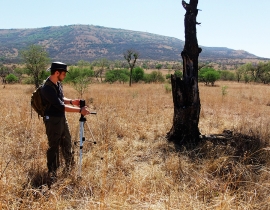 Life as an intern at Colchester Zoo’s UmPhafa Reserve