It’s a classic African landscape scene, but one that is becoming increasingly rare. A colony of vultures, flying high above the tree canopies, making those slow, lazy circles for which they are famous.

Vultures are under immense threat throughout the world and their populations are decreasing rapidly. Out of the nine vultures species that occur in South Africa, all are either endangered or critically endangered. Vulture conservation is therefore a major concern for wildlife conservationists.

Many African cultures believe that certain bodyparts of a vulture contain powers of premonition or foresight. The possession and ceremonious use of the bird’s skull for example is believed to transfer the vulture’s clairvoyant abilities to a person. Possessing a dried foot of a vulture is also believed to bring good luck. For this African muthi, vultures are illegally hunted or food sources are poisoned. This can wipe out  huge vulture numbers at once and has resulted in a 70% decline of breeding pairs since 2004. Another reason why vultures are so endangered is the accidental poisoning through medicinal drugs used to treat livestock. The anti-inflammatory drug Diclofenac for example is, if ingested, fatally toxic for the birds.

Vultures are often believed to be harbingers of death and therefore unwanted. However, these magnificent birds are a key component to maintaining healthy ecosystems. Because of their role as nature’s garbage disposers, vultures are keeping the environment clean and free of contagious diseases. They have an extremely corrosive stomach acid that allows them to consume rotting meat, which is often infected with rabies, hog cholera and anthrax and would, if left laying around, kill other scavengers. Vulture conservation is therefore an essential part of our role on UmPhafa.

UmPhafa has had a vulture restaurant for many years, but this year we decided to change the location to see if it would draw more vultures in.  The idea of constructing a new vulture restaurant in plain sight of the Drakensberg mountains, the cape vulture’s main nesting site, was therefore very exciting for staff as well as interns.

Once a suitable area was selected, we started off by clearing trees and shrubs in a radius of about 30m to create a solid place to land for the heavy birds as well as a sufficient space for them to sit and fight over a carcass. Dead trees that we planted upright in the ground served the purpose of sturdy perching posts for the vultures to bask and digest after a meal, and to give them a convenient drop-off from which to gain leverage when taking to flight. A road for easy access to drop off carcasses was also created. Even though all this was hard work under the blistering sun, interns and staff both enjoyed the tasks and were excited to see the results of the completed restaurant. In the near future, we are planning on adding a bird hide to the site. This will allow us to observe and study vultures from up close, without disturbing their natural behaviour.

First baits were put out on the restaurant when we unfortunately located a dead zebra, which had been taken down by a leopard and abandoned straight after. Two camera traps were put up along the carcass for monitoring. Our hopes went high when we saw vultures circling above the restaurant after the weather cleared the following morning. And indeed, when we went to check on the site, we were overjoyed to see the success of our work as we found close to 80 vultures, along with crows, fish eagles, yellow-billed kites and a tawny eagle feeding on the carcass. 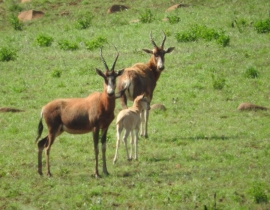 Rain arrives at Colchester Zoo’s UmPhafa Reserve as the year comes to an end!

As the end of the year fast approaches UmPhafa... 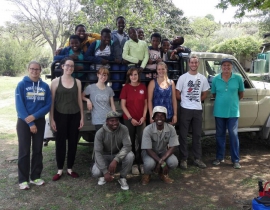