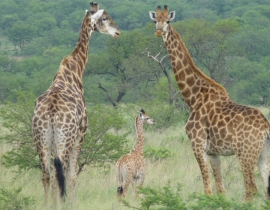 The lambing season at our UmPhafa Reserve in South Africa this year has gone far better than we expected or could have hoped for. With the past massive fires ravaging most of the reserve and the late rains we were uncertain how our adult animals would cope with these harsh conditions let alone new calves and lambs, but it seems that nature has yet again shown us how incredibly resilient it really is.

So far our lambing counts have shown that numbers are similar to previous years. Much awaited and appreciated heavy rains have created some muddy impassable roads which have hampered our counts a little during February. With an area of over 6,000 hectares to cover, counts take a whole day! With storms almost on a daily basis it makes it difficult to find a gap where the roads have all dried out. However, once the rains have stopped we will endeavour with looking at our population growth in detail.

We hope to introduce a new bloodline with regards to our Impala antelopes this year. It is important for us to ensure that the gene pool of our animals is as diverse as possible. Although the reserve is a large wilderness area it is still fenced prohibiting the movement of many but not all of the species. We will also be moving off the reserve a number of Impala males as our sex ratio with regards to male and female of this species is now too high on the male side which could result in lots of fighting during the breeding season if this move does not take place. They can spend more time fighting than mating which can then reduce their population growth.

We are also looking forward to a number of new giraffe calves that we hope will be born during March and April and other arrivals that we are sure will take us by surprise. Watch this space for more news!

Here at UmPhafa we have a number of staff... 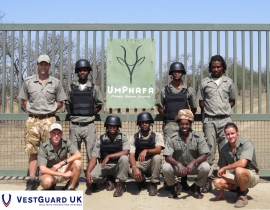 Vestguard UK help UmPhafa Staff with the fight against poaching!

With security incidents such as poaching on the increase...